When Tino and I first started dating he let me in on a little secret. Nothing crazy. Just that he was a huge fan of a young musician. He didn’t know why but the music filled his heart and he loved it. It was at that moment I decided that if I could ever get tickets to go to a concert, I would. I knew it wouldn’t be an easy task because this person was skyrocketing to fame and wasn’t slowing down.

Fast forward 8ish years and it seemed as if all the stars were finally going to align and we were going to get to go to a concert. FINALLY. People, we had gone through job changes, moving houses, a baby, having literally pennies to our name, ups and downs, and FINALLY being blessed with amazing jobs… Tinos dreams were going to come true. So, we bought the tickets 8 months in advance. Granted they weren’t very good seats but who cares?? We were there.

October 2018 is finally upon us and it’s concert month. The concert is on Friday the 5th so we left on Thursday when Tino got out of work so we wouldn’t be rushing on concert day.

A wonderful friend of mine who lives just a few miles from where we stayed offered to take Isla for the entire evening. I am still so thankful for her and her family for watching my wild child all evening. Around 4:30 we dropped her off, went back to the hotel, hopped onto the shuttle, and went on our way.

I’ve never been to AT&T Stadium and let me say this… that place is gigantic. Tino said it was like a spaceship. I said it was like the Axiom from Wall-E. Huge! As we were walking in there was several food trucks and a couple of radio tents set up with photo booths and what not. We had lots of time to kill before our hike so we went and took some pictures at the booth before we went in. While we were there we all signed up for a drawing to pit and suite tickets to the show. After we finally made it to our seats we Oooed and Awwwed at the grander of the stadium. 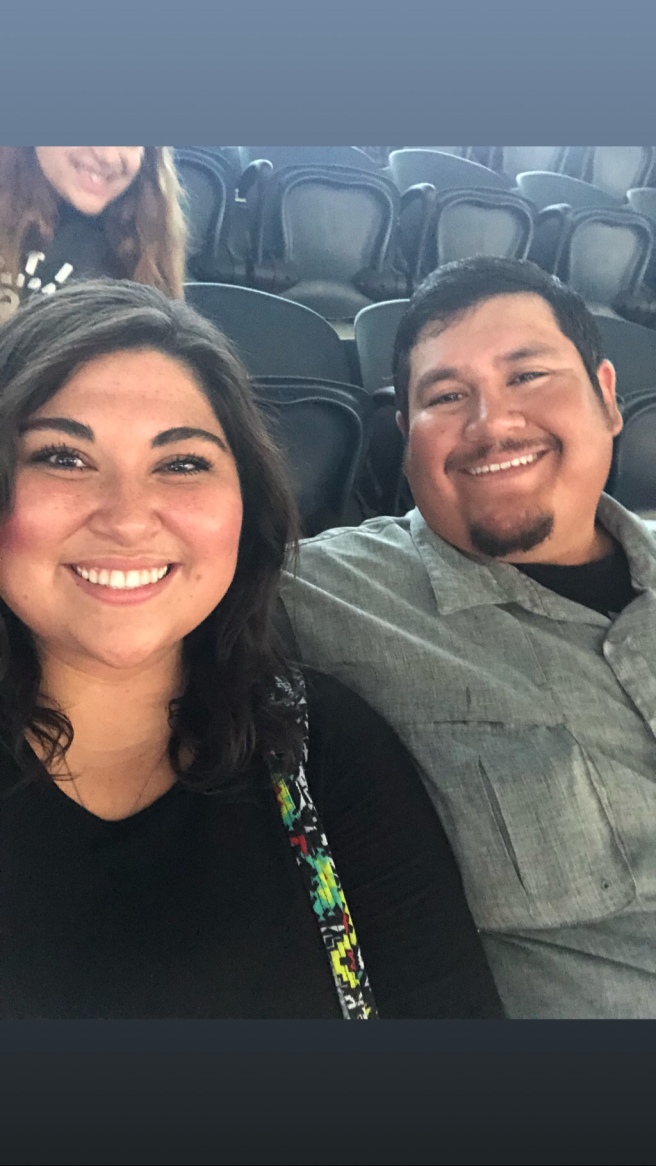 As we watched the first of the two opening acts we made friends with the people around us and anxiously waited for the main show. All of a sudden it happened… my phone rang and the radio booth was calling me to tell me that I had won.

I had just won suite tickets to watch none other than Miss TAYLOR SWIFT!!!

Then she told me I had 10 minutes to get from where I was (basically 5 stories up separated by 100k people) to where she was. If you ever seen me, I’m not in any type of running condition but we did it. Unfortunately they only gave me 2 tickets, so I had to kiss my sister and crying niece goodbye and Tino and I ran for our lives. We got there, got the tickets, made it back up to our suite and began the task of getting my sister and niece into the suite with us.

Once we got everybody settled we had about 2 minutes before the show started. Let me just tell you, Taylor Swift puts on an AMAZING show. From the second she steps on stage to the minute the show is over it. Is. Magic. When you walk in you get a bracelet that is radio synced to the music as she sings. Throughout the concert not only are waves of emotions billowing over the 100,000 people there, everybody’s bracelets are twinkling and flashing along as she performs. One second everything is red and pounding to the beat of the music. Next thing you know the entire stadium is an explosion of pink and you’re screaming for Romeo to take you somewhere you can be alone. She had the everybody’s full attention and even had us all quiet together. So cool. Even if you aren’t a HUGE fan (like Tino) but think her music is okay (like me) I absolutely recommend going to one of her shows. You will have a really good time. She does NOT disappoint.

So my dear husband was living the dream. Watching Miss Taylor Swift from the comfort of a suite. She sang her new hits. She sang her classics and that’s what he loved the most. Not only was she blowing us away with her huge songs, she had us all with tears in our eyes while she stood on stage alone with a guitar or alone with a piano singing to us. We were all fangirling HARD. Some more than others but we all were to some level.

So everybody, don’t ever let go of your dreams. If you want to go do something because you love it…. do it. Don’t be embarrassed. Take the leap and even if you’re the biggest, tallest man screaming with a bunch of girls at a Taylor Swift concert… don’t ever forget that everybody’s dreams can come true.

View all posts by adventuresofatexasmomma